Sage Thompson got her start in gymnastics at age six when she took a once a week gymnastics class through her kindergarten. The coach of her kindergarten gymnastics program asked Jenni if she would consider signing Sage up for regular gymnastics due to Sage’s natural talent. Sage quickly excelled in pre-team and began competing level 5 with Arete Gymnastics. After the 2010 season, Sage participated in TOPs Testing and qualified to National Testing. After National Testing, Sage made the TOPs National B Team. Only competing one level 6 meet, Sage began competing level 7 in 2011. At the 2011 Utah State Championships, Sage competed with Olympus gymnastics and placed third all around. Again, after the 2011 season, Sage did TOPs, and she made the TOPs National A Team. Sage had a great level 8 season; at age 9, she won the vault, bars, floor, and all-around titles at the 2012 Utah Level 8 State Meet and qualified to regionals. In 2013, Sage began competing for All American Gymnastics and competed level 9. At the 2013 Utah State Championships, Sage placed first on floor and second on vault, bars, and all around. Sage also qualified to regionals. While competing level 9 and throughout the summer of 2013, Sage began training elite.

In June 2013, when Sage began training elite, her father Bryce was diagnosed with leukemia. Although this time was tough for her and her family, Sage continued to practice and prepare for the 2014 elite and level 10 season. As her father's health regressed during the 2014 season, Sage competed level 10 as well as attending developmental camp and continuing to train elite. Sage's father passed away on February 18, 2014, but she fought through the rest of the season. Although she did not qualify elite during the 2014 season as an 11-year-old, Sage finished third on vault, beam, floor and all-around and first on bars at the Utah Level 10 State Meet and qualified to regionals. During the Summer of 2014, Sage began to upgrade her skills and trained to qualify elite during the 2015 season. In 2015, Sage attended developmental camp, and during one of the camps, she qualified for Hopes with a 49.600 all around score. Unfortunately, injuries kept Sage out of the Hopes Classic as well as the 2016 season.

At the beginning of the 2017 season, Sage’s and her coaches’ plans were for her to qualify junior elite. Sage competed in the 2017 Palm Springs Compulsory Elite qualifier and obtained her score for junior elite compulsory. However, after a two year battle with some nagging injuries, Sage decided that it would be best physically and mentally for her to stop training elite and continue on the JO path. At her first meet back as a level 10, Sage placed first on vault with a 9.750, first on bars with a 9.775, second on beam and floor, and first all around with a 38.350. Her second meet back was the Level 10 Utah State Meet. Sage placed fourth on floor, second on bars and beam, and first on vault and tied for first in the all-around with a score of a 38.275. Sage had another great meet at the Region One Championships where she won the floor title with a 9.700 and won the all around with a 38.150 which qualified her to JO Nationals. At JO Nationals, a couple of errors put Sage behind, but she had a solid meet and had beautiful routines.

Sage kicked off her 2018 season at the California Grand Invitational where she won the bars title. Throughout the rest of the regular season, Sage went undefeated in the all around and went on to win the vault, floor, and all around titles at the Utah State Championships. Sage had another fantastic meet at the Region 1 Championships, winning the bars, beam, and all around championships and qualifying to the JO National Championships. Throughout JO Nationals, Sage was slotted to take first place all around. Unfortunately on her last event, beam, Sage fell on her series. While she did not walk away with an all around medal, Sage came away with second on bars and fifth on vault.

Coming off of a great 2018 season, Sage began her 2019 season at the Lady Luck Invitational where she won the beam title and took second on bars and in the all around. In February, Sage competed at the Charity Choice Invitational where she won the all around title and qualified to the Nastia Liukin Cup. At the Nastia Cup, Sage placed second on bars in the senior division. Two weeks later, Sage competed at the Utah State Championships and won the vault, bars, floor, and all around titles with a huge 38.900. Sage moved on to the Region 1 Championships and came home with gold medals on beam and in the all around as well as a silver medal on bars and bronze medal on floor, qualifying to the JO National Championships for a third year in a row. At JO Nationals, Sage had a fantastic competition, winning the bars title and finishing sixth all around.

Due to coaching changes, Sage began training at Olympus Gymnastics following the 2019 season. Sage began her 2020 season at the California Grand Invitational where she earned a silver medal on vault, bars, and floor. Sage was able to compete five more meets before the season was canceled due to COVID-19. At each of these meets, Sage won the all around title.

Currently, Sage trains at Olympus Gymnastics and is verbally committed to the University of Utah where she will join the team in the fall of 2021.

Favorite Quote: "The only person you should try to be better than is the person that you were yesterday." 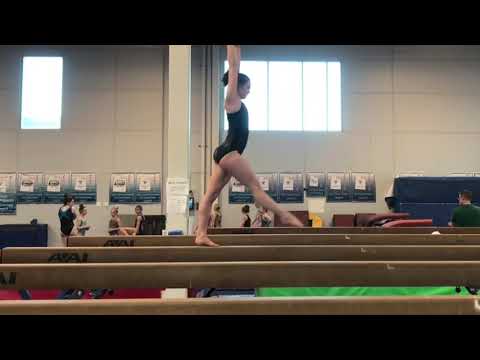 Side Aerial, Side Somi

1.5 Twist thru to Double Full