Sabrina Treffiletti got her start in gymnastics at the age of five after she was flipping around everywhere and broke her elbow playing on the monkey bars at school. Her parents wanted to put Sabrina in gymnastics so she could learn how to tumble safely. Sabrina loved gymnastics right away and began competing in the fall of 2018 as a level 2 with Everest Gymnastics. At her first meet, Sabrina finished second on beam and in the all around. In November at the North Carolina State Championships, Sabrina earned a bronze medal on bars.

Sabrina began her 2019 level 3 season at the EDGE Invitational. Here, Sabrina won the floor and all around titles. Sabrina continued to improve and had her best meet of her season at the North Carolina State Championships where she won the bars title with a 9.750 and took third on floor.

Competing level 4 during the 2020-2021 season, Sabrina began her season at the Everest Challenge Cup. Here, Sabrina finished third on floor and in the all around. She continued to improve throughout the season qualifying to the NC Compulsory State Championships. Here, Sabrina won floor with a 9.900 and placed in the top 10 all around.

Sabrina started off her level 6 season in December 2021. She won the silver medal in both bars and beam and a bronze in the all around.

Currently, Sabrina trains 16 hours per week under coach BiYu Sun at Everest Gymnastics. Sabrina's goal for level 4 is to score a 38.00 in the all around and make America's Top 100 list. In the future, Sabrina hopes to earn a college scholarship for gymnastics.

Favorite Quote: "You earn your medals at practice and pick them up at meets!" 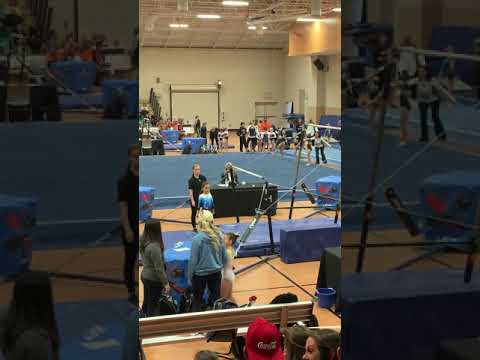