Piper Slocum got her start in gymnastics at the age of four in a mommy and me class. Piper loved the class right away and quickly progressed once she was older. In the fall of 2013, Piper began competing level 3 with Sonshine Gymnastics and went on to finish fourth on beam and floor at the North Carolina State Championships. The next season, Piper competed level 4 and finished as the North Carolina beam state champion.

After competing level 5 during the fall 2015 season, Piper began her optional career in January 2016 as a level 6. At her first meet, the Sand Dollar Invitational, Piper won the beam title with a huge 9.800. After taking third all around at the Everest Classic, Piper competed level 7 during the rest of the season and qualified to the Region 8 Championships. Here, Piper took third on beam and sixth all around.

After a stellar level 9 season, Piper began her 2019 level 10 season at the Kurt Thomas Invitational where she placed third on vault, beam, and in the all around. At her next meet, the Chow's Challenge, Piper unfortunately injured her foot on vault. However, Piper came back strong and was able to petition to the Region 3 Championships. At regionals, Piper finished in the top 10 on bars and beam and showed an immense amount of determination coming back just ten weeks later after her injury.

Piper kicked off her 2020 season at the Alamo Classic where she had a fantastic meet winning the vault, bars, beam, and all around titles. Two weeks later, Piper competed at the Metroplex National Elite Qualifier where she earned her junior elite compulsory score. Piper also competed in the optional session and just missed on getting her qualifying score, but she finished second on beam and floor. Piper was able to compete three more meets before her season was cut short due to COVID-19. Piper won each level 10 meet she competed in during the 2020 season. Due to the remainder of the 2020 season being canceled, USAG allowed for all Hopes and Elite Qualifiers to retain their qualifying score for the 2021 season. With this, Piper will keep her junior elite compulsory score for the 2021 season.

Following her 2020 season, Piper began training at Discover Gymnastics. Piper began her 2021 season as a level 10 at the Biles Invitational where she won the bars title and came in third all around. Two weeks later at the WOGA Classic, Piper won the vault, bars, floor, and all around titles, and earned a spot at the Nastia Liukin Cup. At the end of February, Piper traveled to Indianapolis to compete in the Nastia Liukin Cup where she had a solid performance competing amongst the best level 10s in the nation. A month later Piper qualified to the Texas State Championship where she placed 3rd on bars and 10th in the All Around. From state she qualified to Region 3 Championships where she placed top 5 in bars, floor, and AA. Piper concluded her season at National Championships

Currently, Piper trains 32 hours per week under coach Juan Corza at Discover Gymnastics in Houston, Texas. Piper's goal is to earn a college scholarship for gymnastics.

Favorite Quote: "It's impossible to know your true potential if you're not willing to risk pushing too far from time to time." - Tommy Rivs 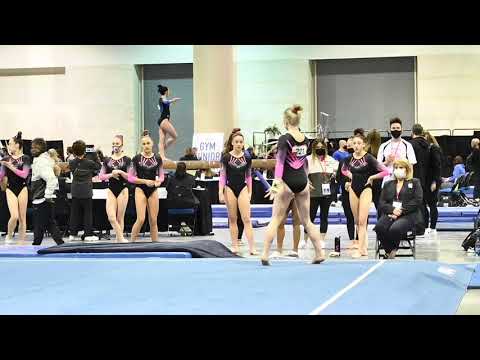 Round Off, Double Back Dismount