Olivia Ahern got her start in gymnastics in a Pre-K recreational class at the age of five. Olivia attended this class once per week until she turned seven, which is when she moved to River City Gymnastics. Within three months, Olivia was invited to the club’s developmental program, and began competing level 4 in January 2014 with River City. Olivia had a great first season of gymnastics, and finished sixth on vault at the Tennessee State Championships.

Olivia skipped level 5 and began her optional career in January 2015 as a level 6. At her first meet, the Blues & BBQ Invitational, Olivia won the beam title and placed second all around. Olivia greatly improved throughout the season and went on to win the beam title with a 9.775 and place second all around at state. In 2016, Olivia competed level 8. In February, Olivia was invited to Developmental Invite Camp. As a level 8, Olivia won the bars title and placed second all around at the Tennessee State Championships. From state, Olivia qualified to the Region 8 Championships. At regionals, Olivia, finished fourth on floor.

Olivia attended Developmental Invite Camp until January 2016, and in February 2017, Olivia was invited to Developmental Camp. Olivia competed her first level 9 meet in January 2017 at the Blues & BBQ Invitational. Here, Olivia won the beam title and took third all around. At her next meet, Olivia won all four events and the all around title. At the Tennessee State Championships, Olivia had a great meet and won the vault, floor, and all around titles. Olivia moved on to the Region 8 Championships where she placed in the top 10 on floor.

Olivia began her 2017-2018 season at the Myrtle Beach Cup where she earned her elite compulsory score. In January, Olivia went to Developmental Camp. During verification at camp, Olivia earned her Hopes 12-13 score and qualified to the Hopes Classic. Olivia also competed level 10 during the 2018 season. At her first meet, Olivia placed second on beam and third all around. At state, Olivia had a solid meet, coming on sixth on floor. Olivia next competed at regionals where she placed fifth on floor. Olivia also was the first alternate for JO Nationals. Olivia concluded her season at the Hopes Classic where she came home with a bronze medal on vault.

Olivia began her 2019 season at the Blues and BBQ Invitational as a level 10. Here, Olivia swept all four events and the all around, winning all five titles. At the beginning of February, Olivia competed at the Buckeye National Elite Qualifier and earned her junior elite compulsory score. At the Tennessee State Championships as a level 10, Olivia won the bars title and took third all around. One month later at the Region 8 Championships, Olivia won the all around title, qualifying to the JO National Championships. Olivia concluded her JO season at JO Nationals where she finished fifth on beam and floor.

One week after the JO National Championships, Olivia attended developmental camp where she competed in verification and earned her junior international elite score, qualifying to the American and U.S. Classic. At the end of June, Olivia competed at the American Classic and finished 12th on bars. Olivia finished up her season three weeks later at the GK U.S. Classic having a great meet.

Olivia began her 2020 season at International Gymnix in Montreal, Canada. Olivia competed as a junior elite at Gymnix and finished eighth all around. Olivia also advanced to the event finals where she won the floor title. Unfortunately, due to the COVID-19 pandemic, Olivia's season was cut short as the remainder of the season was canceled.

Currently, Olivia trains 30-36 hours per week under coaches Erica ad Keno Anderson, and Jessica Prince at Believe Gymnastics Academy. Inn the future, Olivia's goals are to make the US National Team, and earn a scholarship to a Division 1 school for gymnastics.

Favorite Quote: "Whether you think you can or can't, you're right!" 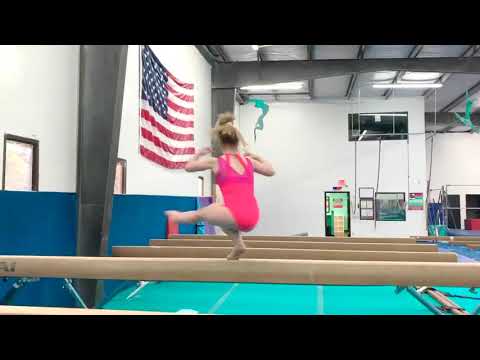 Side Aerial, Split Jump, Back Tuck