Nola Matthews got her start in gymnastics at the age of three in a mommy and me class at USA Sports. Three years later, Nola began competing level 3 with USA Sports and placed 10th all around at the NorCal South Level 3 State Championships. In 2014, Nola competed level 4 and took home the uneven bars bronze medal at the NorCal South State Meet.

In 2015, Nola began training at Airborne Gymnastics Training Center and participated in TOPs Testing where she went on to make the 2015 TOPs A National Team. At her first level 5 meet, Nola won the bars title and placed third all around. Nola finished up a great level 5 season at the NorCal State Championships where she won the bars and floor titles and took home third all around. For the winter/spring 2016 season, Nola skipped level 6 and went right to competing level 7. Nola finished in the top 5 in the all around throughout the season and placed third all around at the NorCal Level 7 State Meet. Nola participated in TOPs Testing again for the 2016 season and was invited to Developmental Invite Camp.

Nola skipped level 8 and competed both level 9 and Hopes during the 2017 season. On addition, Nola was invited to Developmental Camp. At the NorCal Level 9 State Meet, Nola finished 8th on beam and qualified to the Region 1 Championships. At Regionals, Nola placed third on beam and fifth all around and qualified to the Western National Championships. Nola had a great meet at Westerns and placed 7th on beam and 8th on floor in a tough age division. After her level 9 season concluded, Nola qualified Hopes at the Parkettes National Elite Qualifier. At the Hopes Classic, Nola placed 10th on bars.

Nola began her 2018 level 10 season at the California Grand Invitational where she won the beam title. She then went to the Fiesta Bowl National Elite Qualifier and earned her score to qualify for Hopes 12-13 and the Hopes Classic. At the NorCal Level 10 State Championships, Nola placed 4th on beam. Nola finished her JO season at the Region 1 Championships where she placed in the top 10 on bars. In July, Nola competed in the Hopes Classic in Salt Lake City, UT. Unfortunately, Nola took a hard fall on her second event - bars - and was not able to finish her routine. However, Nola came back strong and was able to finish her meet and compete both beam and floor. Nola finished fifth on beam.

Coming off of a solid 2018 season, Nola began her 2019 season as a level 10 at the California Grand Invitational where she won the bars title with a 9.750 and took second on floor. At the beginning of March, Nola competed at the KPAC Cup National Elite Qualifier and earned her junior elite compulsory and optional scores, qualifying junior elite and to the US Classic. One week later, Nola competed at the NorCal State Championships and came home with a silver medal on bars and a fourth place finish in the all around. Nola finished her 2019 level 10 season at the Region 1 Championships where she finished in the top 10 on bars, beam, and in the all around and qualified to the JO National Championships. Nola concluded her level 10 season at JO Nationals with a 5th place finish on bars and also came home with medals on beam, floor, and in the all around.

At the end of June, Nola competed at the American Classic in Salt Lake City, UT where she earned a bronze medal on beam and earned her qualifying score to the U.S. Championships. One month later, Nola competed at the GK U.S. Classic and earned a medal on beam. Nola finished up her inaugural junior elite season at the U.S. Championships where she had a great two day competition and earned her junior elite qualifying score for the 2020 season. In November, Nola and her team traveled to France where she competed at the Combs la Ville international competition. Here, Nola won the uneven bars title and debuted her new floor routine.

Nola began her 2020 season competing in the open division at the California Grand Invitational where came in fourth on beam. Unfortunately, Nola was only able to compete two more meets before the remainder of the season was canceled due to COVID-19. Due to the remainder of the 2020 season being canceled, USAG allowed for all Hopes and Elite Qualifiers to retain their qualifying score for the 2021 season. With this, Nola qualified to the 2021 American and US Classic competitions as a junior elite.

Currently, Nola trains 30 hours per week under coaches Cleo Washington, Melissa Metcalf, and Melanie Ruggiero at Airborne Gymnastics Training Center. Nola's goal for her 2021 season is to make the Junior National Team. In the future, Nola’s goal is to earn a gymnastics scholarship to Oklahoma, UCLA, or Utah.

Favorite Quote: "Every day may not be good, but there's good in every day." 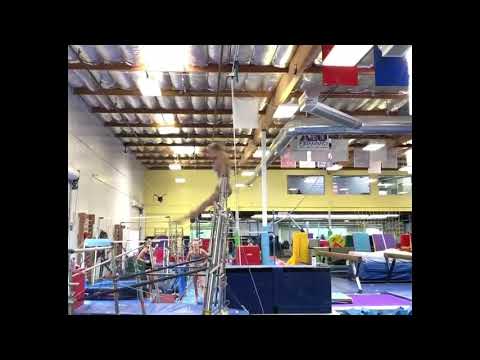