Molly Neinstein got her start in gymnastics at the age of seven in a recreational class. Molly took to the sport right away and began competing in March 2013 at the age of seven as a level 4 with Monarch's Gymnastics. Due to the USAG/Skill level change, Molly competed level 3 during the fall 2013 season and went on to finish in the top 10 on vault, beam, and in the all around at the SoCal North State Championships.

Following her level 3 season, Molly began training at Paramount Elite Gymnastics and competed level 4 during the 2014 season. Molly had a great season as a level 4 and finished third on floor and in the all around at North Sectionals. Competing her final year of compulsories as a level 5 in 2015, Molly began her season at the Hollywood Open Invitational where she took third on bars and beam and fifth all around. Throughout the season, Molly continued to improve throughout the season and went on to take fourth on beam and fifth on floor at the SoCal North State Championships.

Molly began her optional career in January 2016 as a level 7 at the OC Classic. Here, Molly finished fourth on floor and fifth on vault. Three months later at the SoCal State Championships, Molly had a great meet finishing third on beam and fourth on vault. From state, Molly qualified to the Region 1 Championships where she concluded her season with a fourth place finish on vault. During the 2016 season, Molly also began attending Developmental Invite Camps.

Competing level 8 during the 2017 season, Molly kicked off her season at the Team OC Classic where she took second on beam and third on vault and in the all around. In March at the SoCal State Championships, Molly brought home bronze medals on vault and floor and qualified to regionals for the second year in a row. Molly finished up her season at regionals where she had a fantastic competition, winning the beam title, taking home silver medals on floor and in the all around and a bronze on bars.

During the 2018 season, Molly competed level 9 and attended National Elite Qualifiers. Molly competed her firs level 9 meet of the season at the California Grand Invitational and finished second on vault. At the end of January, Molly competed in the Fiesta Bowl National Elite Qualifier in the Hopes 12-13 division and finished in the top 10 on floor out of 37 competitors. Later in the season at the SoCal State Championships, Molly finished ninth on floor and advanced to the Region 1 Championships. Molly concluded her level 9 season at regionals with a fourth place finish on vault and sixth place finish on floor.

After finishing up her 2018 season, Molly began training at Wallers' GymJam Academy. During the 2019 season, Molly competed a second year of level 9 and had a fantastic season. Molly began her season at the California Grand Invitational where she finished second on vault and floor and fifth all around. Two weeks later at the Manhattan Classic, Molly brought home the beam and all around titles with her beam score earning her a spot on America's Top 100 scores. In March at the SoCal State Championships, Molly took third on vault, fourth on floor, and sixth all around. One month later at regionals, Molly had her best meet of her season taking second on beam and in the all around, third on bars, and fourth on vault and floor, punching a ticket to the Western Championships. Molly finished up her season at Westerns with a great competition bringing home the gold medal on vault and silver medals on floor and in the all around. In July, Molly was selected to represent Team USA at the PanAmerican Maccabi Games. Here, Molly had a fantastic meet winning team gold with team USA as well as gold medals in the all around vault, and floor, and a silver medal on bars.

Competing level 10 in 2020, Molly began her season at the SCEGA California Classic where she brought home a silver medal on floor.

Currently, Molly trains 23 hours per week under coaches Alex Waller, Steve McCain, and Iryna Krasnianska at Wallers GymJam Academy. Molly's goal for the future is to earn a college scholarship for gymnastics.

Favorite Quote: "And one day she discovered that she was fierce, and strong and full of fire, and that not even she could hold herself back because her passion burned brighter than her fears." - Mark Anthony 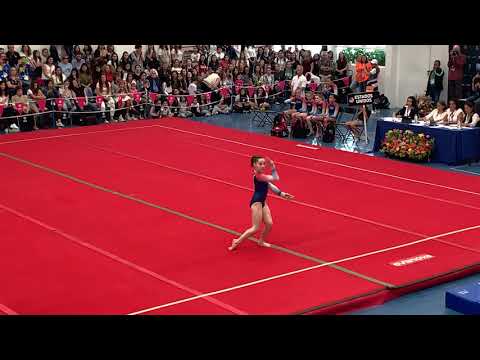