Maddison Reidenbach got her start in gymnastics at the age of four when she flipped off the diving board while her and her family were swimming. Maddison instantly loved gymnastics and there was no turning back. Maddison was invited onto Pre-Team at the age of five and began competing with Hudson Gymnastics in Hudson, Wisconsin at the age of six in the “old” level four. In 2013, Maddison competed the new level 4 and placed fifth on vault at the Wisconsin Level 4 State Meet. As a level 5 in 2014, Maddison placed second on floor and fifth all around at State.

In 2015, Maddison competed her first year of optionals: level 6. Maddison had a great season and placed fourth on beam at the State Championships. After her 2016 level 7 season, Maddison began training at Flips Gymnastics in White Bear Lake, MN. During her 2017 level 8 season, Maddison improved at each and every meet, and at the 2017 Minnesota Level 8 State Meet, Maddison placed second on bars and beam, and third all around. Maddison’s placement at State qualified her to be a part of the Minnesota State Super 8 Team for Regionals; Maddison is one of four gymnasts at Flips Gymnastics to represent the State Super 8 Team in 2017. At Regionals, Maddison placed in the top 10 on bars, beam, floor, and in the all around.

Maddison kicked off her 2018 level 9 season at the Peppermint Twist Invitational where she placed second on vault. Maddison continued to improve her all around score at almost every meet throughout the season and placed fifth all around at the Minnesota State Championships. Beginning to peak at the right time, Maddison had the best meet of her season so far at the Region 4 Championships where she won the vault, floor, and all around titles, qualifying to the Western Championships. Maddison's best meet of the season occurred at Westerns where she came away with the vault title and silvers on bars and in the all around.

Coming off of a fantastic first level 10 season, Maddison began her 2020 level 10 season at the Winter Challenge where she finished second on beam and third all around. Through the end of February, Maddison finished in the top three in the all around at each meet. Unfortunately, due to the COVID-19 pandemic, Maddison's season was cut short as the remainder of the season was canceled.

Favorite Skill: Round Off, Whip, 1/2 Rudi

Favorite Quote: "Nothing is impossible. The word itself says 'I'm Possible!'" 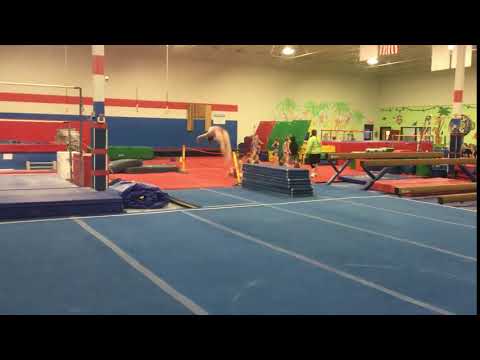