Committed to University of Minnesota

As a young child, Lauren always had a lot of energy and wanted to flip around the house; she got her start in gymnastics in a tumbling class at the local YMCA. The class instructor recommended that Lauren join an actual gymnastics club when she was beginning to do advanced skills on her own. By age four, Lauren began the level 3 pre-team group at her gym. Lauren began competing at the age of seven in 2010 as a level 5 with Shen’s Gymnastics Academy. At the Massachusetts State Championships, Lauren finished third on vault and bars and fourth all around. As a level 6 in 2011, Lauren finished third on floor and second on vault, bars, beam, and in the all around at State.

Lauren began competing level 10 as a twelve-year-old at the Christmas on the Chesapeake meet where she placed second on vault, and first on beam and floor. Lauren took home another all around title at the State Championships as well as titles on beam and floor. At the Region 6 Championships, Lauren placed first on vault, beam, and floor; Lauren also placed second all around and qualified to the 2016 JO National Championships. At her first nationals, Lauren placed in the top 10 on vault with a 9.500. During the 2017 season, Lauren competed her second year of level 10 as well as competed in a compulsory elite qualifier. At the qualifier, Lauren obtained the qualifying score for junior elite. At the 2017 State Championships, Lauren placed second on bars and first on vault, beam, floor and in the all around. Lauren also won the all around at the Region 6 Championships and qualified to her second JO Nationals. Lauren had a great meet at Nationals where she was crowned the National Beam Champion with a 9.650.

Following JO Nationals, Lauren competed at the Brestyan's National Elite Qualifier. On the first day, Lauren earned her junior elite compulsory score. On the second day, Lauren had a fantastic competition and scored a 51.950, qualifying Junior International Elite. One month later, Lauren traveled to Columbus, OH to compete at the GK U.S. Classic. For her first elite competition, Lauren had a great meet and placed seventh on beam.

Lauren missed out on most of the 2018-2019 season but came back to compete vault and beam as a level 10 at the Starlight Invitational in March where she won the vault title. Lauren began her 2019-2020 season at Christmas on the Chesapeake. Here, Lauren came in sixth on bars and in the all around. Unfortunately, due to the COVID-19 pandemic, Lauren's season was cut short as the remainder of the season was canceled.

Currently, Lauren trains 26 hours per week at Brestyan’s American Gymnastics under coaches Mihai and Sylvia Brestyan, Melissa Skudris, and Michele Yerardi. Lauren will graduate from high school in 2021 and will join the University of Minnesota gymnastics team in the fall of 2021.

Favorite Quote: "Work until your idols become your rivals." - Drake 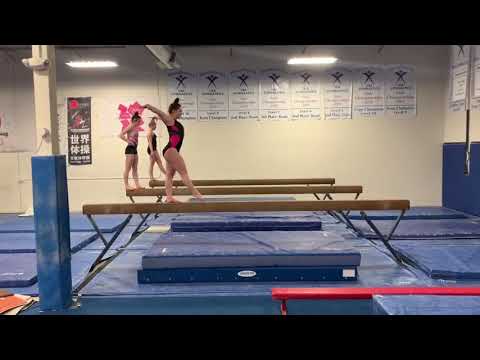