From a young age, Katelyn had a lot of energy and was always climbing trees, flipping around the house, and swinging from the monkey bars. Katelyn’s parents needed an outlet for her, so they put Katelyn in a preschool gymnastics class and she loved it!

Katelyn began competing at age six as a level 4 with Alamo Gymnastics Center. Following her first season of competitive gymnastics, Katelyn began training at United Gymnastics Academy. During the summer of 2012, Katelyn participated in TOPs Testing and made the TOPs National Diamond Team. Katelyn competed level 5 during the fall 2012 season and went on to place fifth on vault at the Texas South State Championships. After south state, Katelyn began training at Aerial Athletics. Katelyn completed her 2012 level 5 season at the Texas State Championships where she had a solid competition. During the winter/spring 2013 season, Katelyn competed three meets of level 5, and during summer 2013 she participated in TOPs Testing for the second year. From state testing, Katelyn qualified to National Testing and made the TOPs National B Team.

Katelyn’s optional career began in January 2014 as a level 7 at the Alamo Classic. Here, Katelyn placed sixth on floor. Katelyn continued to improve throughout the season and qualified to the Region 3 Championships from state. At regionals, Katelyn had her best meet of the season! For a final year, Katelyn participated in TOPs during the summer of 2014 and went on to make the TOPs National A Team.

Following Katelyn’s great level 7 season, she skipped level 8 and began competing level 9 in January 2015. Katelyn improved her all around score at almost each and every meet. At the Texas State Championships, Katelyn finished sixth on bars and beam, and seventh all around. Katelyn moved on to the Region 3 Championships where she placed fifth on beam.

In 2017, Katelyn competed level 10 and trained to qualify for a second year of Hopes. Out of her first three level 10 meets of the season, Katelyn finished second all around in two of them. At the Texas State Championships, Katelyn had a great meet and won the vault and floor titles as well as second all around. Katelyn went on to the Region 3 Championships where won the all around, vault, and beam tiltes and took home a bronze on floor, qualifying to the JO National Championships. As one of the youngest competitors at JO Nationals, Katelyn placed in the top 15 on vault. After JO Nationals, Katelyn’s coach, Steve Arkell opened up his own team, Mavericks at Artemov. Three weeks after JO Nationals, Katelyn competed at the Parkettes National Elite Qualifier where she qualified to the Hopes Classic for the second year in a row. At the Hopes Classic in the 12-13 division, Katelyn won the vault and floor titles and placed third on beam. Katelyn also placed fourth all around, qualifying to the Hopes Championships. Katelyn had a fantastic performance at the Hopes Championships and won the floor title, placed third on beam, and took home the silver medal in the all around.

After a great 2017 level 10 and Hopes season, Katelyn competed her second year of level 10 as a 12 year old and had the goal to qualify junior elite. Katelyn opened up her 2018 season at the Chow’s Challenge Elite Compulsory Qualifier where she earned her compulsory score for junior elite. Katelyn next competed at the City of Lights National Elite Qualifier where she earned her juniors elite optional score, qualifying Junior International Elite and qualifying to US Classic meets. After qualifying junior elite, Katelyn finished up her level 10 season. At state, Katelyn won the floor title with a 9.700 and placed third all around and also earned a silver on vault and bronze on beam. Katelyn moved on to regionals where she won the all around title in addition to a silver medal on beam and bronze on vault. Katelyn also qualified to JO Nationals. Katelyn had another great competition at JO Nationals and won the floor title in addition to placing fifth all around. Although Katelyn’s level 10 season had concluded, her junior elite season was just beginning. At the beginning of July, Katelyn competed at the American Classic. Katelyn had a good experience and it was a great warm up meet for the GK U.S. Classic which was to take place in three weeks. At the GK U.S. Classic, Katelyn finished in the top 10 on floor and earned her qualifying score for the U.S. Championships.

Following her first elite season, Katelyn began her 2019 season at the Biles National Elite Qualifier where she won the all around title and qualified to the US Classic. In June, Katelyn was invited to compete at the Junior World Championships Trials. Here, Katelyn finished seventh on vault. One week after the Junior World Trials, Katelyn competed at the American Classic in Salt Lake City, Utah and came in third on beam. At the U.S .Classic in July, Katelyn earned her qualifying score to compete in her second U.S. Championships. Katelyn concluded her season at the U.S. Championships with a solid competition and earning her qualifying score to the 2020 American and U.S. Classic competitions.

Currently, Katelyn trains 30 hours per week under coaches Steve and Gaby Arkell at Mavericks at Artemov Gymnastics. In the future, Katelyn’s goal is to earn a spot on the U.S. National team and represent Team USA in international competitions. Katelyn also hopes to earn a scholarship to a division 1 school for gymnastics.

Favorite Quote: "Be fearless in the pursuit of what sets your soul on fire." 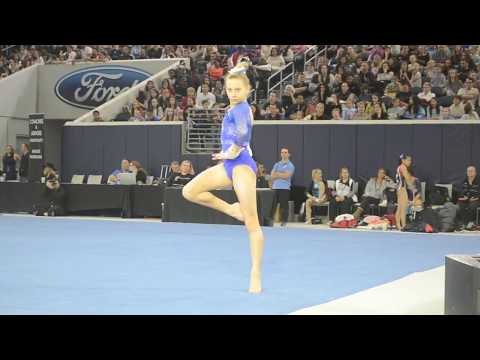