Julie Charland got her start in gymnastics at the age of six and was quickly invited to pre-team and then the team program at DeVeau's School of Gymnastics. Julie competed as a level 2 during the spring 2016 season and finished first on bars, floor, and in the all around at the Indiana State Championships.

Following her level 5 season, Julie skipped level 6 and competed one meet of level 7 in December 2018 where she won the vault, bars, beam, and all around titles. Julie competed her first level 8 meet in January 2019 at the Circle of Stars Invitational. Here, Julie finished second on bars and fourth all around. In March at the Indiana State Championships, Julie took third on bars and qualified to the Region 5 Championships. Julie concluded her season at Regionals and came in seventh on bars.

Competing level 9 during the 2019-2020 season, Julie began her season at The Cup. Here, Julie only competed bars but finished fifth on the event. At her next meet, the Bravo Classic, Julie competed all four events and finished fourth on beam. Julie continued to improve throughout the season and had her best meet of the season at Elevate the Stage where she took second on bars. Unfortunately, due to the COVID-19 pandemic, Julie's season was cut short as the remainder of the season was canceled. In 2021 Julie competed at the JP Midwest Showdown where won bars and earned a silver medal on beam. She concluded her season at the Indiana State Championships placing top 10 on bars and beam.

Currently, Julie trains 20 hours per week under coaches Dave Marus, Kyle Grable, Autumn Grable and Jaycie Phelps at JPAC Gymnastics. Julie's goal for the 2022 season is to qualify Hopes and compete level 10. In the future, Julie hopes to qualify and compete as an elite gymnast, earn a spot on the US National Team, and earn a college scholarship for gymnastics.

Favorite Quote: I can do all things through Christ who strengthens me. Phil 4:13 Let me tell you something you already know. The world ain’t all sunshine and rainbows. It is a very mean and nasty place and it will beat you to your knees and keep you there permanently if you let it. You, me, or nobody is gonna hit as hard as life. But it ain’t how hard you hit; it’s about how hard you can get hit, and keep moving forward. How much you can take, and keep moving forward. That’s how winning is done. Now, if you know what you’re worth, then go out and get what you’re worth. But you gotta be willing to take the hit, and not pointing fingers saying you ain’t where you are because of him, or her, or anybody. Cowards do that and that ain’t you. You’re better than that. – Rocky Balboa 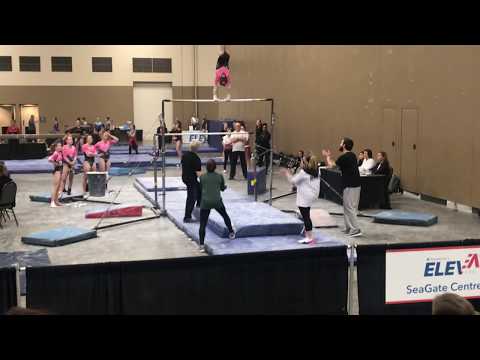