Julia Toland got her start in gymnastics at the age of six after her mom noticed her flipping around the house as a child. Julia began taking classes at Head Over Heels Gymnastics in Massachusetts and began competing in the spring of 2013 as a level 4. Julia had a great first season of competitive gymnastics and went on to finish second on vault and third on bars and beam at the Massachusetts State Championships.

Due to the USAG skill/level change in 2013, Julia competed another season of level 4 during the 2014 season. Julia began her season at the Brestyan's Invitational where she took second on beam. In March at state, Julia finished sixth on beam. As a level 5 during the 2015 season, Julia took fifth on beam at the Massachusetts State Championships.

Julia began her optional career as a level 7 in December 2015. At her first meet, Julia finished third on beam. Julia continued to improve throughout the season and went on to earn the silver medal on beam at the Massachusetts State Championships.

Competing level 8 during the 2016-2017 season, Julia kicked off her season at the Rhode Island Invitational. Here, Julia took fifth on vault and eighth all around. Three months later at the Massachusetts State Championships, Julia finished in the top 10 on vault and in the all around.

Julia competed her first season of level 9 during the 2017-2018 season and began her season at the Rhode Island Invitational where she finished fifth on vault. In March at state, Julia took eighth all around. Julia competed a second season of level 9 during the 2018-2019 season. At the Massachusetts State Championships, Julia finished ninth all around and qualified to the Region 6 Championships. Here, Julia took seventh on vault.

As a first year level 10 during the 2019-2020 season, Julia began her season at Shen's New England Classic where she brought home silver medals on beam and floor. Julia competed all four events for the first time as a level 10 in February at the Mardi Gras Invitational. Here, Julia won the beam title and came in fourth all around. Julia was able to compete one more meet before the season was canceled due to COVID-19.

Currently, Julia trains 20 hours per week under coach Patty Anderson at Head Over Heels Gymnastics. In the future, Julia hopes to earn a college scholarship for gymnastics.

Favorite Quote: "Be the best me!" 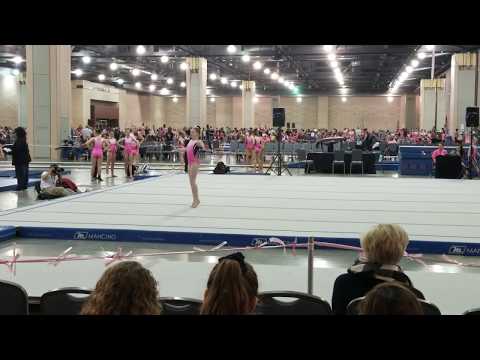