Jacquie Moran got her start at the age of two in mommy and me classes and took to flipping around right away. As Jacquie got older, she quickly progressed and began competing level 4 in 2010 with Santa Cruz Gymnastics Center. The following two seasons, Jacquie competed the old USAG level 5 and went on to finish fourth on floor at the NorCal State Championships. Following the 2012 season, Jacquie began training at Airborne Gymnastics. Due to the USAG skill/level change, Jacquie competed another season of level 5 in 2013 and finished as the NorCal Level 5 state bars, beam, floor, and all around champion.

Jacquie began her optional career in January 2014 as a level 7 at the National Judges Cup Championships as a member of the NorCal State Team. Here, Jacquie won the floor title and finished third all around. Jacquie had a great level 7 season and went on to sweep all four events and the all around at the NorCal State Championships. During the Summer, Jacquie participated in TOPs Testing and went on to make the TOPs National A Team.

In 2015, Jacquie competed one meet of level 8 and competed the rest of the season as a level 9. At the NorCal State Championships, Jacquie took third on bars with a 9.700 and finished fifth all around. During the 2015 season, Jacquie also qualified Hopes 10-11.

As a first year level 10 in 2016, Jacquie began her season at the Classic Rock Invitational where she finished second on bars. Jacquie continued to improve throughout the season and went on to finish second on floor and in the all around at the Region 1 Championships, qualifying to the JO National Championships where she medaled on beam and in the all around. After her level 10 season, Jacquie began training at San Mateo Gymnastics. Jacquie also began attending Developmental Camp and qualified Hopes. At the Hopes Classic in the 12-13 division, Jacquie took third on vault and sixth all around, qualifying to the Hopes Championships. At the Hopes Championships, Jacquie finished in the top 5 on bars and beam and took seventh all around.

Jacquie kicked off her 2017 level 10 season at Elevate Gym Fest and took third on floor. Two weeks later at the NorCal State Championships, Jacquie took second on bars, beam, and the all around and advanced to the Region 1 Championships. Jacquie had another successful meet at the Region 1 Championships, winning the floor title and finishing fifth all around, qualifying to JO Nationals for the second year in a row. Jacquie concluded her level 10 season at JO Nationals where she had a great meet, taking the silver on bars, bronze on floor, and fourth all around, making her a member of the JO National Team.

Three weeks after concluding her 2017 level 10 season, Jacquie competed at the Parkettes National Elite Qualifier where Jacquie earned her junior elite compulsory and optional scores, qualifying to the US Classic. Jacquie finished her season at the American Classic and finished 14th on bars.

Jacquie unfortunately missed out on her 2018 season, but came back strong in 2019 and began her season at the Winter Invitational where she came away with the vault, bars, and beam titles. At the NorCal State Championships, Jacquie had her best meet of her season, winning the all around with a huge 39.025 as well as he bars and floor titles. Jacquie had another amazing meet at regionals where she took second all around with a 38.875, second on bars with a 9.850, and first on beam with a 9.775, advancing to the JO National Championships. Jacquie concluded her season at JO Nationals winning the bars title and placing fifth on beam and in the all around.

Currently, Jacquie trains 32 hours per week under coaches Armen Astoian and Oksana Bostrova at San Mateo Gymnastics. Jacquie is committed to the University of Georgia and will join their gymnastics team in the fall of 2022.

Favorite Quote: "Just do it." 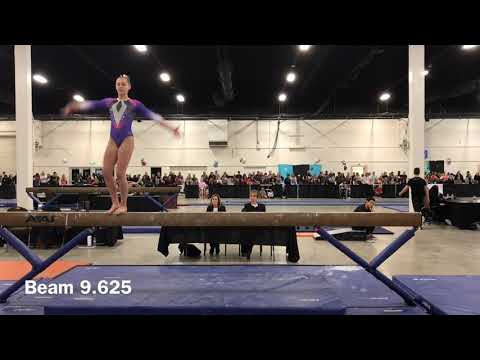 Round Off, Double Pike Dismount