Gabrielle Hardie began gymnastics at the age of four when a friend brought her to a "take a friend to class" day. The coach told Gabrielle she had a lot of natural talent and urged her to take classes. Gabrielle began competing in the winter of 2016 as a level 4 with All American Gymnastics Academy. However prior to beginning her competition season, Gabrielle participated in TOPs Testing during the summer of 2016 and made the TOPs National Diamond Team. In her first season of competitive gymnastics, Gabrielle won the floor title and came in second on vault, bars, beam, and in the all around at the South Dakota State Championships.

In 2017, Gabrielle began attending Developmental Invite Camps. Gabrielle also tested out of level 5 and competed one meet of level 7 in December 2017 where she won the bars, beam, and all around titles. Gabrielle competed level 8 during the 2018 season and qualified to represent the South Dakota State Team a the Region 4 Championships. At regionals, Gabrielle finished eighth on bars and beam.

Gabrielle began her 2019 season at the Palm Springs Gymnastics Cup Elite Compulsory Qualifier where she earned her Hopes 10-11 compulsory score. Gabrielle also competed a few meets of level 9 during the 2019 season. In 2020, Gabrielle competed level 10 and at Hopes Qualifiers and earned her Hopes 10-11 compulsory score. Unfortunately, due to the COVID-19 pandemic, Gabrielle's season was cut short as the remainder of the season was canceled.

Currently, Gabrielle trains at All American Gymnastics Academy. Gabrielle's goal for the 2021 season is to get her yurchenko full on vault, a triple series on beam, and score a 37.00 in the all around. In the future, Gabrielle hopes to qualify elite.

Favorite Quote: "If it doesn’t challenge you it won’t change you." 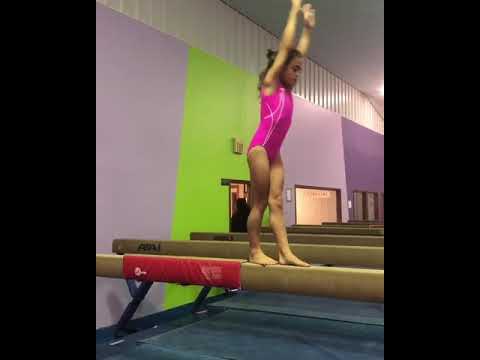