After learning how to walk at 8 months and taking her first step at 7.5 months Emma's mom thought she was a handful and decided to take her to mom and tot classes. Emma loved being in the gym from the start and was eventually invited to join the team program at Legacy Elite Gymnastics once she got older.

Emma began competing in January 2014 as a level 3 at the age of seven. At her first meet, Emma came in second on bars, beam, floor, and in the all around. In March at the Illinois State Championships, Emma won the bars and all around titles and came in second on beam as well as third on vault and floor. During the summer of 2014, Emma participated in TOPs Testing. From her state testing, Emma made the TOPs National Diamond Team as one of the nation's top seven year olds.

Competing level 4 in 2014, Emma began her season at the Legacy Elite Winter Classic where she won the floor title. Two months later at the Illinois State Championships, Emma won the beam, floor, and all around titles. Emma participated in another TOPs season during the summer of 2014. As an eight year old, Emma was now eligible to qualify for national testing. From state testing, Emma qualified to national testing where made the TOPs National A Team as one of the top 45 eight to ten year olds.

As a level 5 in 2016, Emma won the bars, beam, and all around titles at the Illinois State Championships. Emma participated in TOPs state testing for her third year during the summer of 2016 and once again qualified to national testing. For the second year in a row, Emma made the TOPs National A Team from TOPs national testing.

Following the 2016 season, Emma began training at GymNasti Gymnastics. Emma began her optional career in February 2017 as a level 7 at the IGI Chicago Style Meet. Here, Emma came in fourth on beam. In March at the Illinois State Championships, Emma came in sixth on bars, beam, and in the all around. After her 2017 season, Emma went back to Legacy Elite and for a final year participated in TOPs Testing. For her final year in TOPs, Emma qualified to national testing and once again made the TOPs National A Team.

After her 2018 level 8 season, Emma began training at Naperville Gymnastics. As a level 9 during the 2018-2019 season, Emma kicked off her season at the Aspire Classic in December 2018. Here, Emma took third on beam. At her next meet, the St. Jude Benefit Meet, Emma won the all around title. In March, Emma competed in the KPAC Cup Elite Compulsory Qualifier where she earned her Hopes 12-13 compulsory score. One week later at the Illinois State Championships, Emma earned bronze medals on bars and floor and qualified to the Region 5 Championships. At regionals, Emma came in second on beam and fourth all around, qualifying to represent Region 5 at the Eastern Championships. Emma concluded her level 9 season at the Eastern Championships with a phenomenal finish, coming in third on beam and in the all around. Emma competed two more meets in 2019 at National Elite Qualifiers. Emma improved her all around scores across both national qualifiers and had a great ending to her season.

Emma began her first level 10 season in January 2020 at Leenda's Island Adventure. Here, Emma won the bars title and came in second on beam and in the all around. Two weeks later, Emma earned her Hopes 12-13 compulsory score at the Buckeye Classic. In February, Emma competed at the Excalibur National Elite Qualifier where she came in second on vault and in the all around in the Hopes 12-13 division. Unfortunately, the remainder of the season was canceled due to COVID-19. Due

Following an abrupt ending to the 2020 season, Emma began training at Flips Gymnastics North Shore. Emma began her 2021 season at the UGA Invitational as a level 10 where she came in fourth on vault. In February, Emma competed at the Brestyan's Las Vegas National Elite Qualifier. here, Emma won all four events as well as the all around and earned her Hopes 13-14 optional score to qualify to the Hopes Classic. Prior to the Hopes Classic, Emma finished up her level 10 season. In March at the Illinois State Championships, Emma came in fourth all around. Three weeks later at the Region 5 Championships, Emma finished fifth on bars, sixth on floor, and eighth all around to qualify as an alternate to the Level 10 National Championships. After regionals, Emma went back to Naperville Gymnastics. She finished up her season at the Hopes Classic where she had a a strong competition.

Currently, Emma trains 30 hours per week under coach Brittany Jackson Delk at Naperville Gymnastics. Emma's goal for her 2022 season is to qualify junior elite. In the future, Emma hopes to earn a college scholarship for gymnastics.

Favorite Quote: As my friend says, “A glow stick has to break before it glows.” 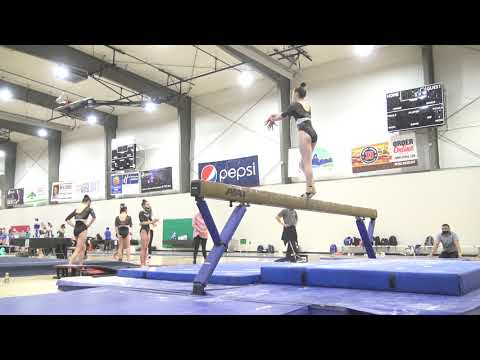