Elle Mueller got her start in gymnastics at the age of 2 1/2 in a mommy and me class. Elle quickly took to gymnastics and loved it. Elle began competing in October 2012 as a level 4 with Jam Hops Gymnastics. Elle had a great first season of gymnastics and went on to place second on vault and third on floor at the Minnesota State Championships. Due to the USAG skill/level change, Elle competed another season of level 4 during the fall of 2014 and went on to win the beam, floor, and all around titles at the Minnesota State Championships.

Following her level 4 season, Elle began training with Twin City Twisters and skipped level 5. Elle began competing level 7 during the winter of 2014. At her first meet, the Peppermint Twist, Elle won the vault, beam, and all around titles. Elle had a solid level 7 season and finished her season at the Minnesota State Championships with a fourth place finish on bars. During the 2016 season, Elle competed level 8. Elle began her season at the Peppermint Twist where she took home the bronze on beam. Elle improved throughout the season and went on to place third on beam at State.

Elle competed her first season of level 9 in 2017. At State, Elle had a great meet and brought home the gold on floor as well as second on beam and floor, and third on bars. Elle moved on to the Region 4 Championships where she placed first on beam, second on floor, and fourth all around, qualifying to the Level 9 Western Championships. At Westerns, Elle finished in the top 10 on bars. Elle competed a second year of level 9 during the 2018 season while also aiming to qualify Hopes. Elle earned her Hopes compulsory score at the KPAC Cup, and two weeks later competed at the Minnesota State Championships where she won the vault, bars, beam, floor, and all around titles and scored her highest all around score of her gymnastics career. At the Region 4 Championships, Elle had another great meet and won the bars, beam, floor, and all around titles. Elle made her second trip to the Level 9 Western Championships where she placed fourth on bars and beam. Just two weeks after Westerns, Elle competed at the Auburn National Elite Qualifier where she earned her Hopes Optional score, qualifying to the Hopes Classic. At the qualifier, Elle also won the bars title and placed second on beam, floor, and in the all around. Elle finished her season at the Hopes Classic in Salt Lake City, UT where she had a solid competition and became the first alternate for the Hopes Championships.

Elle kicked off her 2018-2019 level season at the Peppermint Twist Elite Compulsory Qualifier where she earned her Junior Elite compulsory score. Elle then competed her first level 10 meet at the end of January at the Legacy Luau Invitational and came home with a gold medal on bars. Elle did not compete at the Minnesota State Championships, but competed at the Region 4 Championships winning the bars title and coming in second on beam, floor, and in the all around, qualifying to the JO National Championships. Elle peaked at the perfect time for JO Nationals and had her best meet of her season, taking first place on beam and in the all around as well as a third place finish on bars.

With the goal to qualify junior elite in 2020, Elle began her 2019-2020 season at the Peppermint Twist Elite Compulsory Qualifier where she earned her junior elite compulsory score. Elle competed one level 10 meet during the 2020 season at the Gopher JO Invite. Here, Elle won the vault and beam titles. Unfortunately, due to the COVID-19 pandemic, Elle's season was cut short as the remainder of the season was canceled.

Currently, Elle trains 24-28 hours per week under coaches Sarah Jantzi, Steve Hafeman, Sami Wozney, Mike Hunger, and Kassandra Nathe at Twin City Twisters. In the future, Elle hopes to earn a scholarship to a division 1 school for gymnastics and represent Team USA at the 2024 Olympics.

Favorite Quote: "Whether you think you can or you can't, you're right." 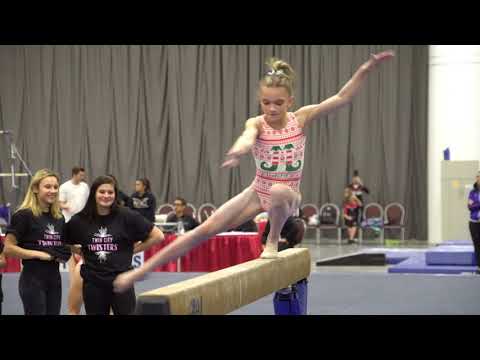