As an energetic toddler, CJ Kenueke began gymnastics at the age of two as her mom wanted CJ to tire herself out enough to take a nap. From then, CJ loved being in the gym and quickly progressed as she got older. At the age of seven, CJ began competing as a level 3 with University of Denver Youth Gymnastics. The following season, CJ competed level 4 and finished third on vault at the Colorado State Championships.

After her level 4 season, CJ began training at TIGAR and began her 2015 level 5 season at the Airborne Fall Classic where she took second on vault, floor, and in the all around. CJ had a great final season of compulsories and took third on beam and in the all around at state.

CJ began her optional career in 2016 as a level 7 at the Pikes Peak Cup where she on the floor title and took second in the all around. CJ continued to progress and have a great level 7 season and finished second on floor, third on vault, and fifth all around at state with a 38.225. From state, CJ moved on to the Region 3 Championships where she finished in the top 10 on vault and beam.

CJ began her 2018-2019 season at the Myrtle Beach Elite Compulsory Qualifier where she earned her Hopes 12-13 compulsory score for the 2019 season. CJ competed her first level 10 meet in January at the Coloradical Classic and came home with gold medals on vault, beam, floor, and in the all around as well as a silver medal on bars. One month later, CJ competed at the Pikes Peak Cup and finished as the top junior athlete, qualifying to the Nastia Liukin Cup. At the Nastia Liukin Cup, CJ finished in the top 10 on vault and beam. Two weeks later at the Colorado State Championships, CJ won the vault title and finished fifth all around advancing to the Region 3 Championships. CJ had a great meet at regionals, finishing second on floor and in the all around and third on beam, qualifying to the JO National Championships. CJ concluded her level 10 season at JO Nationals.

With the goal to qualify elite in 2020, CJ began her season at the Coloradical Classic Elite Compulsory Qualifier where she earned her junior elite compulsory score. CJ competed her first level 10 meet of the 2020 season at the Tampa Bay Turners Invite. Here, CJ won the beam title and earned bronze medals on bars and in the all around. CJ was able to compete three more meets before the season was cut short due to COVID-19. At her two final level 10 meets of the season, CJ finished second all around. Due to the remainder of the 2020 season being canceled, USAG allowed for all Hopes and Elite Qualifiers to retain their qualifying score for the 2021 season. With this, CJ will retain her junior elite compulsory score for the 2021 season.

CJ kicked off her 2021 season at Charity Choice Invitational earning silver on vault, bronze on bars & gold on floor and all around. At Charity Choice CJ also qualified to the Nastia Liukin Cup. Here, she placed second on vault and top 5 AA. She then competed at the Colorado State Championships where she had an amazing meet winning silver on beam & winning gold on vault, bars, floor, all around with a 38.050. Qualifying to Region 3 Championships CJ won beam, earned silver AA with a 38.075 & bronze on vault and floor. Concluding her great season at the National Championships she took home the silver medal on beam and finished top 10.

Currently, CJ trains under coach Marcelo Figueiredo at Active Athletics in Littleton, Colorado. CJ's goal for her 2022 season is to qualify to the Nastia Liukin Cup again and Developmental Nationals.

Favorite Quote: "Don't worry about darkness, for that is when the stars shine brightest." - Napoleon Hill 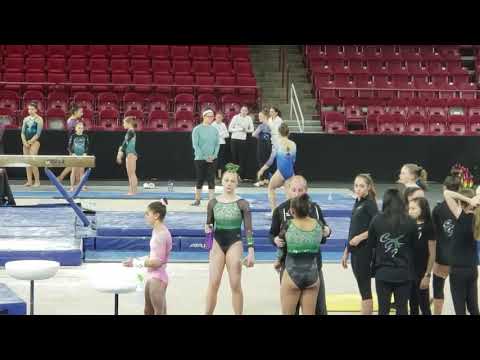