Ava Wellmeier got her start in gymnastics at the age of six in a recreational class. After getting bored with doing handstands and cartwheels and wanting to try more advanced skills, Ava wanted to quit gymnastics and begin soccer. However, Ava's former preschool teacher suggested she try private lessons. After taking a few private lessons, Ava progressed quickly and began competing in 2013 as a level 4 with Zanesville Gymnastics. In her first few months of competing, Ava went on to place second on beam and in the all around at the Ohio State Championships. Due to the USAG skill/level change, Ava competed a second season of level 4 in 2014 and finished as the Ohio state vault and bars champion as well as taking home bronze medals on floor and in the all around.

Following her level 4 season, Ava competed just one meet of level 5 and then went on to compete level 7 during the beginning of the 2014-2015 season. After four meets of level 7, Ava finished the season as a level 8 and went on to qualify for the Region 5 Championships.

At just 9 years old, Ava began competing level 9 in January 2016. Ava had a solid level 9 season and finished in the top 10 on vault and bars at the Ohio State Championships. From state, Ava qualified to the Region 5 Championships where she completed her season. Following her level 9 season, Ava began training at Buckeye Gymnastics and participated in TOPs Testing during the Summer of 2016. From state testing, Ava qualified to National Testing, and then went on to make the TOPs National B Team.

Ava competed a second year of level 9 during the 2017 season and opened up her season at the Atlanta Crown Invitational where she won the floor title and took second all around. Ava had a great year and placed third on beam at the Ohio State Championships and advanced to regionals where she took third on vault.

In 2018, Ava competed level 10 and Hopes and began her season at the CGA Coaches Spectacular where she won the vault, bars, floor, and all around titles. In March, Ava competed at the International Gymnix Competition in Montreal, Canada in the Novice division. Here, Ava took second on bars and third on vault. Ava continued to have a solid season, earning her Hopes 12-13 compulsory score in the middle of her level 10 season. At the Ohio State Championships, Ava won the bars title and placed second on vault. Ava had another great meet at the Region 5 Championships, winning the vault title.

Ava began her 2019 season at the Circle of Stars Invitational as a level 10. One week later, Ava competed in the CGA Coaches Spectacular Elite Compulsory Qualifier where she earned her Junior Elite and Hopes 12-13 compulsory score. Two weeks later, Ava competed at the Buckeye National Elite Qualifier. Here, Ava had a great meet, winning the vault, floor, and all around titles and earning her Hopes 12-13 optional score, punching a ticket to the 2019 Hopes Classic. In March, Ava competed at the Ohio State Championships and came home with a gold medal on floor, silver medal on vault, and qualified to the Region 5 Championships. Ava had her best meet of her season at regionals, coming in second in the all around and qualifying to the JO National Championships. At JO Nationals, Ava concluded her season with a solid competition and medaling on floor.

Currently, Ava trains 28 hours per week under coach Kittia Carpenter at Buckeye Gymnastics. Ava's goal for this season is to qualify to JO Nationals, and in the future she hopes to earn a college scholarship for gymnastics.

Favorite Quote: "Every morning you have two choices; continue to sleep with your dreams, or wake up and chase them." 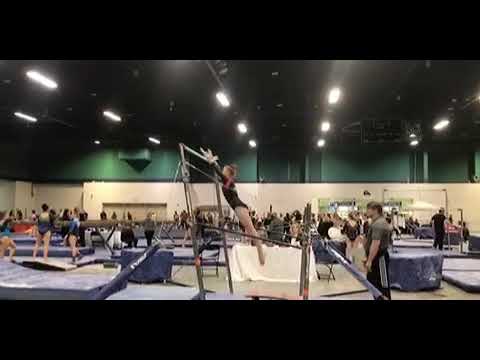 Round Off, Double Twist Dismount

Front Tuck Step Out thru to 2.5 Twist