Asia Reid got her start in gymnastics at the age of six after watching gymnastics videos on YouTube and wanting to begin classes. Asia took to the sport right away and began competing in 2015 as a level 4 with Golden City Gymnastics in Florida.

Asia competed one meet of level 4 in 2015 and then tested out of level 5 to begin competing level 7 during the spring 2017 season. Between level 4 and 7, Asia participated in TOPs Testing during the summer of 2016 and made the TOPs National Diamond Team. At her first level 7 meet, the Atlanta Crown Invitational, Asia came in second on floor and third on beam. In March at the Florida State Championships, Asia won the vault and floor titles and finished second in the all around. From state, Asia qualified to the Region 8 Championships. Here, Asia finished in the top 5 on bars and beam. During the summer of 2017, Asia participated in TOPs Testing for a second year in a row. From state testing, Asia qualified to National Testing and went on to make the TOPs National A Team.

Following the 2017 season, Asia began training at Evo Gymnastics. Asia competed level 8 in 2018 and began her season at the CGA Coaches Spectacular where she won the vault, bars, and all around titles. Throughout the rest of the season, Asia finished in the top 3 in the all around at each meet. At state, Asia won the floor title and took third on beam and floor. Asia concluded her season at regionals winning the vault and all around titles.

Asia began her 2019 level 9 season at the Tampa Bay Turners Invitational where she won the vault title and took third on beam. Asia competed one more meet of level 9 in Florida, and then her and her family moved to Arizona and Asia began training at Desert Lights Gymnastics. Asia competed her first meet with Desert Lights in March at the Valley of the Sun Challenge and won the vault, floor, and all around titles. Two weeks later at the Arizona State Championships, Asia concluded her season earning a silver medal on vault and floor and a bronze in the all around.

Asia competed a second season of level 9 and Hopes in 2020. Asia began her season at the Fiesta Bowl Elite Compulsory Qualifier where she earned her Hopes 12-13 compulsory score by over 4 points. Asia competed her first level 9 meet of the season at the Long Beach Open where she took second on vault. Unfortunately, due to the COVID-19 pandemic, Asia's season was cut short as USAG cancelled the remainder of the season. Asia's last meet was at the Valley of the Sun Challenge with a win on vault.

Currently, Asia trains 28 hours per week under coach Lisa Spini at Desert Lights Gymnastics. In the future, Asia hopes to earn a spot on the US National Team.

Favorite Quote: "What's meant for you will be for you." 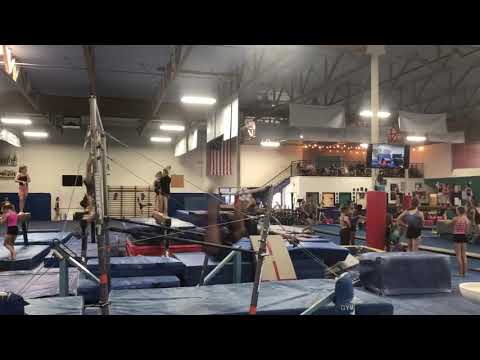 Double Back Half Out Dismount