Addison Sarisky got her start in gymnastics at 18 months old in mommy and me classes. Addison loved being in the gym from the start and began competing in 2014 as a level 3 with Olympic Dreams Gymnastics. In her first season of competitive gymnastics, Addison earned bronze medals on beam, floor, and in the all around at the Ohio State Championships.

During the 2015 spring season, Addison competed Xcel Gold and went on to finish in the top 5 on bars, beam, and in the all around at state. During the summer of 2015, Addison participated in TOPs State Testing. From state testing, Addison qualified to TOPs National Testing where she finished her season as one of the top eight year olds in the country.

Addison began her optional career in February 2016 as a level 6 at the Buckeye Classic. Here, Addison finished fifth all around. Addison continued to improve throughout the season and finished her year at the Ohio State Championships with a gold medal finish on floor as well as a bronze medal finish on beam. Addison participated in TOPs for a second year in 2016. This time from National Testing, Addison was named to the TOPs National B Team.

As a level 7 in 2017, Addison began her season at the CGA Coaches Spectacular. Two months later at the Ohio State Championships, Addison took fourth place on vault and sixth all around. From state, Addison qualified to the Region 5 Championships as a member of the Ohio State Dream Team. Here, Addison finished her season with a sixth place finish on beam. Addison participated in a final season of TOPs during the summer of 2017, and once again made it to National Testing.

Addison began her 2018 level 8 season at the Buckeye Classic. Here, Addison won the floor title and earned a silver medal on vault. At her next meet, Luau In Leos, Addison won the beam and all around titles as well as a second place finish on floor. One week later at the Ohio State Championships, Addison earned a bronze medal on floor. Addison concluded her season one month later at the Region 5 Championships and came home with the beam title. During the 2018 season, Addison also earned her Hopes 10-11 compulsory score.

As a first year level 10 in 2020, Addison began her season at the New Year's Invitational where she took second all around. Prior to the season ending due to the COVID-19 pandemic, Addison earned her Hopes 12-13 compulsory score for the second time.

Due to the abrupt end to the 2020 season, USAG allowed for all qualifying scores to "roll over" into 2021 season. Therefore, Addison began her 2021 season with her Hopes 13-14 qualifying score. Addison began her season as a level 10 at the Buckeye Classic where she came home with a silver medal on floor and bronze medal on beam. Addison also competed in the Hopes Qualifier at this meet and won the beam title in the Hopes 12-13 division. In March, Addison competed at the Ohio State Championships. Here, she finished in the top 5 on bars and beam. Two weeks later, Addison competed at the Parkettes National Elite Qualifier and finished sixth on beam in the Hopes 12-13 division. Addison concluded her season one week later at the Region 5 Championships where she finished in the top 10 on beam.

Addison kicked off her 2022 season at the Stars & Stripes Invitational where she won bars and the all around and silver on vault, beam and floor.

Currently, Addison trains 23-25 hours per week under coaches Dawn Toussaint and Chad Cleland at Olympic Dreams Gymnastics. Addison's goal for the future is to earn a college scholarship to a divison 1 school for gymnastics.

Favorite Quote: “Don’t tell me the sky is the limit, when there are footprints on the moon!” - Paul Brandt 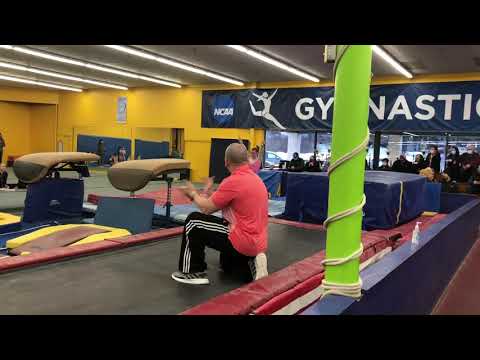 Toe On, Toe Off

Yurchenko Half Off, Front Off